Oh How I Wish I Could Ditch My Boyfriend in Seattle, WA

Wish I Could Ditch My Boyfriend in Seattle, WA

Okay, that wasn’t appropriate. I get it. I’m not appropriate. Scotty McCreery thought it was funny. That’s another story for another time. Ha!

Here’s the thing, that plan didn’t work out, and I am still sitting in Omaha, NE, with “said boyfriend.” He’s pretty good though. We went on this trip last September (2018) or something, and I’m just now looking at the pictures from the trip. Hey, they turned out pretty good.  Take a look at the must sees in Seattle, WA:

Here are a couple of things I didn’t do but wished I did:

What to do in Seattle, WA?

Surrounded by snow-capped mountain peaks, peaceful waters and fantastic lush green forests and parks, Seattle is one of the cities in America that you should visit at least once! If you are planning a trip to Seattle soon, keep reading as today we are sharing some of the best things to do in Seattle!

During the Prohibition era selling alcohol was illegal across the American States. As a result, a number of speakeasy, also known as bling pig establishments appeared. Nowadays, older retro style bars are regarded as speakeasies. If you enjoy sipping on a delicious cocktail, while diving into this old-fashioned times, make sure to read our new article of the best Speakeasies in Seattle.

Situated at Pike Place Market, the first American Starbucks shop is awaiting all the coffee lovers! Grab a delicious Caramel Macchiato and dive into the history of Starbucks. Dating back to 1970s, you will certainly feel like you have taken a step back in time, while you are admiring its retro design!

As one of the oldest public markets in America, Pike’s Place Market is one of the places you should definitely pay a visit to while in Seattle. From fresh food to antique shops, there is a bit of everything for everyone. The lively atmosphere with friendly and happy people, combines with numerous “grammarable spots”, so make sure to stop by the farmer’s market!

Despite the fact that the popular glass Spheres located along Lenora Street are part of the Amazon headquarters in Seattle, they have decided to open them two Saturdays per month to the public as well. We were lucky enough and managed to go inside. The massive glass domes are home to 40,000 plant species and they are an excellent space to hang out, relax and meet some great people!

One of the most extraordinary places you can visit in Seattle is a narrow alley by the Pike’s Place Market. I had no other choice, but to leave my sign here as well and also stuck my gum to become part of this massive collection of colorful gums. The guilt followed me for the rest of the day, but the Bubble Gum Wall is both a tourist attraction and a small piece of modern art!

Jump on the Hopscotch

It doesn’t matter how old we are, the moment you notice the Hopscotch at the center of Seattle’s Downtown, you have no other choice but to jump!

To admire some of the most stunning skyline views of Seattle head to Kerry Park. Covering a territory of 1.26 acres, the park is a fantastic lush green area for a laid-back relaxing walk in nature. We ended up walking all the way from the Space Needle to Kerry Park, leaving 15lbs. A piece behind!

Are you craving some chocolate? Then you should join a guided tour at the Theo’s Chocolate Factory! Not only will you learn a ton of interesting things about the production of the yummy sweets, but you will also get to treat your taste buds to some delicious samples. Make sure to check out the dispensary across the street first!

As the sun is start to set, one of the best places to visit is the Pioneer Square. The district is packed with creative coffee shops, small art galleries, trendy hipster bars and numerous opportunities to grab some delicious food. Not only this but as you are strolling down the alleys, you can admire the fantastic 19th-century-Romanesque Revival architectural style.

The 520 feet tall observation tower is one of the most iconic sights in Seattle. The views from the very top are known to be some of the best across the city, however, with the ticket’s price from $24 to $38 we believe it is not worth it!

If you are missing the peace and quiet of the nature and would like to escape the hustle and bustle of the city, joining a tour to the Olympic National Park is a great idea. The hikes are wild offering views of the majestic mountains, glimpse of the diverse wildlife and dive into the lush green forests.

Located by the waterfront, the giant Seattle Great Wheel is a must-visit when in town. We stayed in a hotel nearby and “oozed” at the lights reflecting into the peaceful waters at night. It is a shame that we never managed to go!

No trip to Seattle would be complete if you have not taken a ferry ride. There are numerous choices depending on how much time you can spare and your personal preferences. The most popular option is the 45-minute-ride to Bainbridge Island, which will allow you to admire the fantastic views of Seattle’s skyline. If you are looking for a small hidden paradise away from the hustle and bustle of the city, you can take the ferry from Mukilteo to Whidbey Island, which is heaven on Earth for hikers with its 100 miles of trails.

Just a 30-minute-drive away from Seattle, you can find the picturesque quiet valley of Woodinville Wine Country. Home to more than 130 wineries spread across 4 different districts, the valley is at the heart of Washington’s wine making. Unfortunately, during our visit to Seattle,we were not aware of this spectacular location. Hence, hoping for another trip soon!

Art lovers should definitely pay a visit to Seattle Art Museum. Besides the main gallery located in the downtown area, visitors can also stop by the Seattle Asian Art Museum and the Olympic Sculpture Park, which are also part of “SAM”. Fantastic Italian paintings and American sculptures are only among some of the masterpiece you will be able to admire at the Seattle Art Museum. We stayed across the street from the gallery, but were not able to make it there. Looking forward to the next trip!

The unusual and quirky design of the building is the very first feature that will grab your attention when visiting the Museum of Pop Culture. As you take a step inside, however, you will be taken on a history tour of both pop culture and science fiction. With over 100,000 items the museum is extremely interesting if you would like to dive into the world of music. As the museum of pop culture was closed during our trip to Seattle, it is one more addition to the itinerary for our next trip.

Spreading on a territory of around 3.5 acres, the Seattle Japanese Garden is one of the most peaceful and secluded hidden gems across the city. Dating back to the 1960s, it is not only one of the oldest Japanese gardens in America, but it is also known as the most authentic one across the states. Taking a stroll down the meandering paths and being surrounded by the lush greenery of the park is a fantastic relaxing experience not commonly found in large cities, such as Seattle!

Known as the gathering place of the city, Seattle Center is a large modern collection of everything from arts to entertainments and education to massive events. Visitors can choose between a huge variety of restaurants offering great food or just grab a coffee and spend the day people watching.

Situated at the Fremont neighborhood, this is one of the most unusual and unexpected tourists sights in Seattle. As you can guess by the name, the massive sculpture represents a troll, which is grabbing a Volkswagen vehicle, which funny enough is with a Californian license plate. Mainly made of concrete, wire and steel rebar, the art piece was constructed in 1990 by four artists, as part of a project focusing on restoring the under the bridge area.

As you start to get hungry, you should head to Dick’s Drive-In. The restaurant chain offers traditional American food. Make sure to try the mouth-watering hamburgers accompanied by a massive milkshake and delicious fries.

If you are looking for some of the most outstanding views of Seattle, you need to stop by the Sky View Observatory. It is located on the top floor of Columbia Center at the heart of Seattle’s downtown. It is a great idea to visit later in the afternoon, so you can admire the stunning panoramic sunset views from there. You can even stop at the High Bar and grab a tasty signature cocktail. The Sky View Observatory is a great alternative to the Space Needle, offering equally breathtaking scenery.

Last but not least on our Seattle itinerary is the Golden Garden Park. From winding trails through the deep forests to the rugged sandy beaches, there is a bit of everything for everyone in the massive more than 85-acres park. You can take a romantic walk down the beach, fish from the pier or even try activities such as kayaking, flying kites, etc. Prepare some snacks and bring them with you, so you can organize a lunch picnic while enjoying the tranquility of this place.

Are you inspired to visit Seattle? If you are already packing your bags, which of the above mentioned attractions would you like to  stop by first? 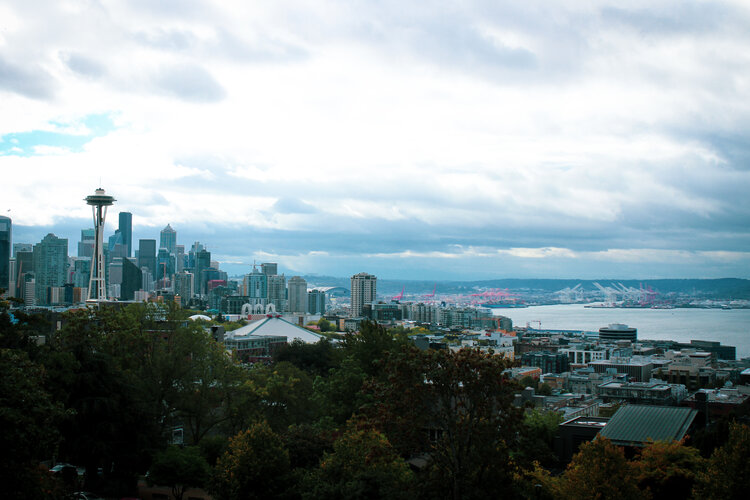 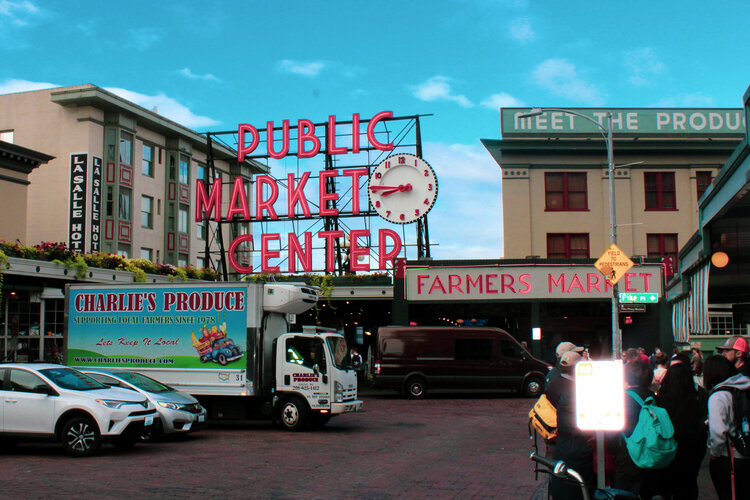 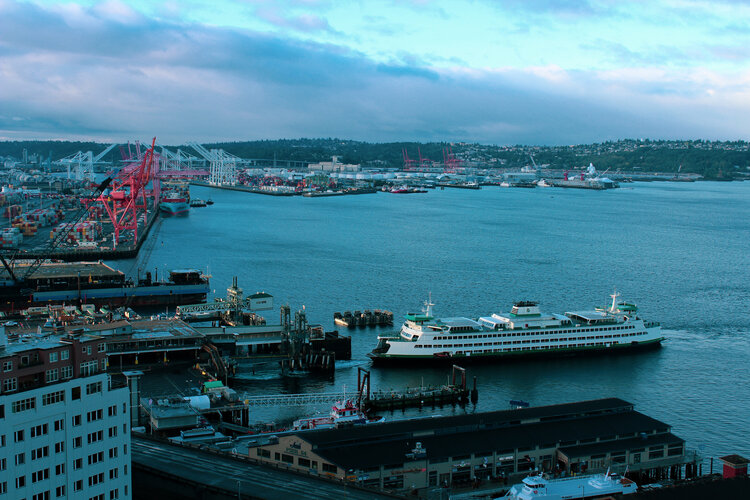 View of harbor from our AirBNB